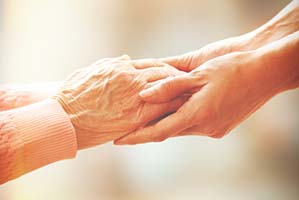 Recently I was pleased to come across an article in the Wall Street Journal that discussed the very positive shift away from overuse of antibiotics in nursing homes.

Being the defender of the microbiome that I am, when I read that up to 70% of nursing home residents receive one or more courses of antibiotics every year and up to 75% of those prescriptions are given incorrectly – well that information had the hair all over my body on end! It was reported that the prescriptions were written for the wrong drug, dose, or duration – and this information is from the Centers for Disease Control and Prevention. Oh my!

Apparently, one of the biggest antibiotic misdiagnoses is for treatment of suspected urinary tract infections. Believe it or not, antibiotics to treat supposed UTIs are being given to the elderly for vague symptoms like confusion, the discovery of bacteria in just one urine sample, or even in the case of a random misstep resulting in a fall.

Sadly, since women are much more likely to develop UTIs then men, many of us ladies have experienced the misery of a UTI. Although it’s possible to have a UTI and not experience obvious symptoms, that is much more the exception than the rule. In the companion book to the public television special The Road to Perfect Health, I list symptoms for UTIs. A few are a persistent urge to urinate, painful or burning urination, frequent urination, and the list continues with other very clear indicators. Finding bacteria in the urine is just one piece of a diagnosis. “Confusion” wasn’t even on my list. So does this mean that confusion is only a symptom of UTIs in elderly people? How can this be?

Dr. Christopher Crnich, an infectious disease specialist and researcher at the University of Wisconsin School of Medicine and Public Health states that generally 50% of women and 25% of men in nursing homes have bacteria in their urine. He then emphasized that didn’t automatically indicate a UTI. Bacteria can develop for many other reasons – immune system and hormonal issues for example. I’ll include an imbalanced gut here, resulting from a diet containing too many sugars. By the way, this is true for people of all ages.

This article really got me thinking as I approached the end. According to Dr. Diane Kane, chief medical officer for St. Ann’s Community, a not-for-profit health-care system in Rochester, NY, who is a passionate critic of UTI over-diagnosis, “When you have dementia, you’re going to have good days and you’re going to have bad days. When you have dementia and you have a bad day, please don’t send a urine, because it’s going to be positive.”

As I interpret Dr. Kane’s statement, “bad days” of dementia (more confusion) will physically manifest as an increase of pathogenic bacteria in a person’s urinary system. Following that line of thought, a decrease in the overgrowth of bad bacteria in the body could potentially alleviate some symptoms of dementia or confusion. That could certainly explain why a patient’s confused mental state may seem to improve while on a round of antibiotics.

Unfortunately, if no effort is made to repopulate the gut with good bacteria after antibiotics, research has shown that bad bacteria and yeast readily re-establish. Upon the return of a confused mental state, further urine testing would reveal more bacteria, perpetuating another misdiagnosis of UTI and laying the groundwork for additional antibiotic treatment. Round and round we go.

In my mind, a much better and more logical step toward improved daily function and cognition for the elderly in nursing homes might be to dramatically increase the amount of good bacteria provided to the gut on a daily basis. The good bacteria will displace the bad, supporting and maintaining the integrity of all the organs of elimination, bladder included. And perhaps positively impact confusion and dementia. I’d love to see more research studies created that look at these parameters. Are you with me?

I’ve blogged often on how declining gut health, toxicity and dementia seem to go hand in hand. I’ve also shared research highlighting how probiotics can be effective treatment for that dreaded C. difficile infection that occurs most often in hospitals and long term care facilities, haunting the weak and elderly.

Let’s all envision a day when antibiotics are the last resort should a person be confused, perhaps has fallen, or mild amounts of bacteria are found in their urine. Instead let’s picture a standard of care designed to increase the good bacteria in the body through daily probiotics, kefir, fermented veggies and/or kombucha. Now that’s HEALTH care!