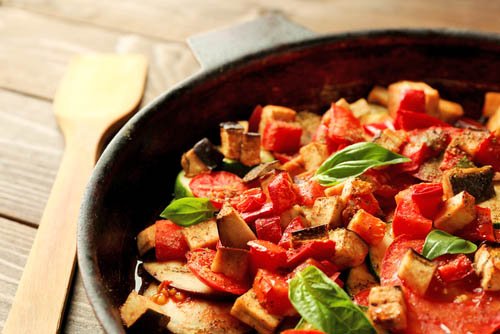 According to the National Institutes of Health (NIH), iron deficiency is the single most prevalent nutritional deficiency worldwide. Its primary symptom is extreme fatigue. Iron deficiency accounts for anemia in 5% of American women and 2% of American men and impacts nearly 3.5 billion people around the globe. Additionally, children, vegetarians and blood donors are at increased risk.

The most common treatment for this type of anemia is oral supplementation with iron. Unfortunately a program of iron supplementation commonly results in constipation or other types of gastrointestinal discomfort. As you know, gut issues are always an interesting topic for me. With iron therapy, it’s critical to manage the gut since constipation will only increase overall toxicity and magnify the debilitating exhaustion symptoms of anemia.

When I saw the article “Can a Pan Add Iron to Your Diet?” in the Wall Street Journal, it immediately caught my eye.

There has been some thought that cooking with cast iron could potentially add iron to your food. I’m always seeking easy, inexpensive and accessible solutions to any issue. Interestingly, there are a lot of factors that impact how therapeutic your cast iron skillet might be. So let’s take a quick closer look:

With this information in mind, here comes the Lucky Iron Fish! Check this out. This is an iron ingot in the shape of a fish that is recommended for use in soups or boiled with drinking water. It’s also suggested to include acids, such as citrus juice or vinegar along with your fish in your soup pot or dinner pan for the reasons explained above.

A research project followed 304 Cambodian women over the course of a year. The study was reported in the journal Tropical Medicine & Surgery. Regular use of the Lucky Iron Fish increased hemoglobin concentration in the blood (an important marker of anemia), compared with a control group that didn’t use the ingot. Anemia in the 3 villages studied dropped by 46%! That’s darn impressive.

The company has a vision of a Lucky Iron Fish in every pot for those populations where anemia is prevalent. For every fish a person purchases, one is donated to a community in need. There’s something very heartwarming about this.

It’s important to be aware that even when iron is transferred to food, certain conditions don’t allow it to be easily absorbed by the body. FYI – the type of iron in meat, called heme iron, is easiest for our bodies to absorb (now you see why vegetarians are more susceptible to anemia). However it’s reported if you ingest vitamin C at the same time as non-heme iron (the type from the cast iron pans or the Lucky Iron Fish), the iron is much more available to be absorbed by the body.

Of course, this makes total sense. Whether you’re adding vitamin C, vinegar, citrus juice, tomatoes (all are acids) as you cook in an unseasoned cast iron pot or pan or you choose to simply drop in the Lucky Iron Fish ingot – you just may have a recipe for increased energy and a ‘gentle on the gut’ restoration of your iron reserves over time – in addition to a delicious meal.

Keep it in mind. I’ll bet you know someone who is diagnosed anemic. Lucky Iron Fish – maybe this year’s different kind of birthday gift?

For over 20 years, Brenda Watson has dedicated her career to helping people achieve vibrant, lasting vitality through improved digestive function. A dynamic digestive care advocate and celebrated PBS-TV health educator, she is among the foremost authorities in America on optimum nutrition and digestion, natural detoxification methods, and herbal internal cleansing.
Close Menu
×
×