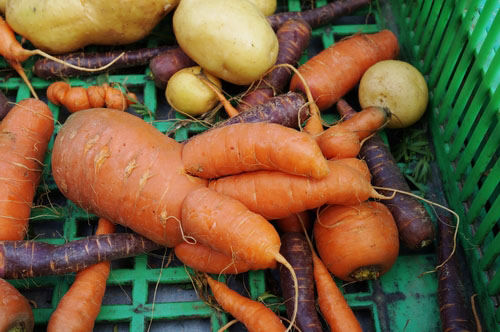 I’d like to think that farmers are smiling across America (and hopefully receiving a bit more profit from their labor intensive work!) A new craze I read about in the Wall Street Journal takes a second and third look at previously discarded ugly veggies!

As you walk down the produce aisle of your favorite grocer, have you ever wondered what happens to all the fruits and vegetables that are misshapen, had a blemish, or were otherwise not picture perfect? If you’ve ever had even a small garden you must realize that not all of the offerings look as though they are “ready for their close-ups”! True life just doesn’t look perfect, although produce in most grocery aisles might lead you to believe otherwise.

Steve Lutz from CMI Orchards in Washington was thrilled to get a call from Walmart! They were piloting an “ugly-apple” project and wondered if he had any contenders. His unattractive apples, blemished by hail, might previously have been sold for a loss on the juice market. Although he’ll not receive top dollar for his misfits, the produce would be purchased at a reasonable price. I’d say that call was a blessing!

I didn’t realize that farmers in Minnesota report that roughly 20% of their produce is deemed cosmetically imperfect by industry standards! That’s a huge amount of waste and loss.

Good news for the consumer – the “homely” crops will generally cost us less. And even better news is that their taste will be as good, sometimes even an improvement over their gorgeous counterparts. Once truly ripe, we’ve all experienced that although seemingly “ugly veggies” may be less visually appealing, their flavors can often be rich and wonderful.

Meet “spuglies” which are potatoes considered too big, too small or blemished, a mangled heirloom tomato with the tagline “a scarred heart can still be a beautiful one”, or perhaps a three legged carrot or plums with proboscises. Grocers are getting creative with names, hoping that the “Hip-Hip Carrot” that has extra arms wrapped around its trunk might inspire customers to give an ugly vegetable a try. You may be seeing relatives of these and other offerings at a Walmart or Whole Foods near you~

It was reported in an August Nielsen/Harris Poll of more than 2,000 adults that most customers still aren’t particularly excited about buying ugly produce, even thought they said the produce “looked cool”. Eight percent said they might buy a twisted cucumber out of pity.

Pity! Some of the most delicious cucumbers I’ve ever eaten were twisted like they had macaroni in their genes. I guess I’m just blessed to have experienced gardens where I’ve learned to love the myriad differences that Nature provides.

I’m with Kathy Means of the Produce Marketing Association when she says “We don’t care if it’s a mutt or a purebred or small. It can be ugly or conventional or whole. We just need people to eat more produce.” I’m sure she’s speaking from a financial perspective, however I’m thinking of the health of Americans! Rule #2 from Skinny Gut Diet – “Eat living foods every day to balance your gut!”

I can see it now. Someone is going to come up with “Fermented Uglies” and make a fortune!

Chris Tantau, a California peach grower, says it best – “All my children are beautiful”. I couldn’t agree more~