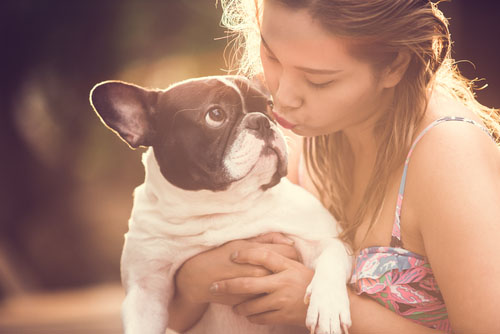 I really enjoyed sharing information about pet supplementation in a recent episode of Pet Talk on National Geographic Wild. I was featured in a segment on Episode 3 that originally aired March 4th. I believe it’s still available for viewing, and I think you’d really enjoy it, especially if you’re an animal lover like me. It offers a lot of interesting information about many different animal species. One of the segments centered on dog-kissing.

Doris and her boyfriend Mark were the guests in the dog-kissing segment along with Doris’ two dogs, Buddy and Miss B. According to Doris, Miss B “is the best kisser in the whole wide world”. I must say I had never considered kissing a dog with the open mouthed intensity that Doris demonstrated. Mark had reached a point where he was no longer interested in kissing Doris (imagine that!). However Doris states that the unconditional love she receives from her canine friends “makes her day worth living”. It was certainly a thought provoking stalemate, and it was also interesting to see the reactions that Doris’ exuberant kissing created on the faces of the hosts of the show and also the audience. It’s probably the same face you have right now.

Bacterial swabs were taken from the throats of both Doris and Mark to determine if there was any harmful bacteria growing there that might have originated from the dogs. Although no disease-causing pathogenic bacteria were detected, Doris’ swab did reveal a type of bacteria that is not normally found in the mouth. Instead that particular bacteria is generally found only in the intestine. Although there was no way to prove it, the general consensus seemed to be that the bacteria was transferred to Doris from one of the dog’s mouths after they licked their own feces (dogs do like to clean all areas!) and then found it’s way into Doris’ mouth from a very affectionate kiss. Eeek!

Another true story was shared with the audience about a roundworm found in a different dog-kissing person. It seems the larvae of the worm traveled up into the lung of the dog, was coughed up into the dog’s mouth and then transferred to the human through a smooch.

I’m thinking perhaps open mouth kissing might be best avoided with our four legged friends! What do you think?

Imagine my surprise when shortly after the filming I came across an article in the Wall Street Journal named “Burning Question: Can Kissing Your Dog Make You Sick?” .

A good awareness point that was made in the WSJ article is to be sure and wash your hands after throwing a ball for your dog, as the saliva could be transferred from your hands onto your face and perhaps contain bacteria best avoided.

Additionally, it’s possible that sleeping with your dog could transfer fleas or other infection. However if you have a healthy dog that is currently maintained on flea and tick meds regularly, your risk is very low.

There is no one who loves dogs more than I do on this planet, so I totally understand the the appeal of dog-kissing and close contact. Ultimately, simple washing with soap and water after you may have received that affectionate lick will generally eliminate contamination. However, please don’t allow your pet to lick an open wound. The potential there is for a parasite or germ to sneak directly into your bloodstream.

I’m looking forward to filming more segments of Pet Talk in the upcoming year. Please keep an eye out and let me know how you like them!